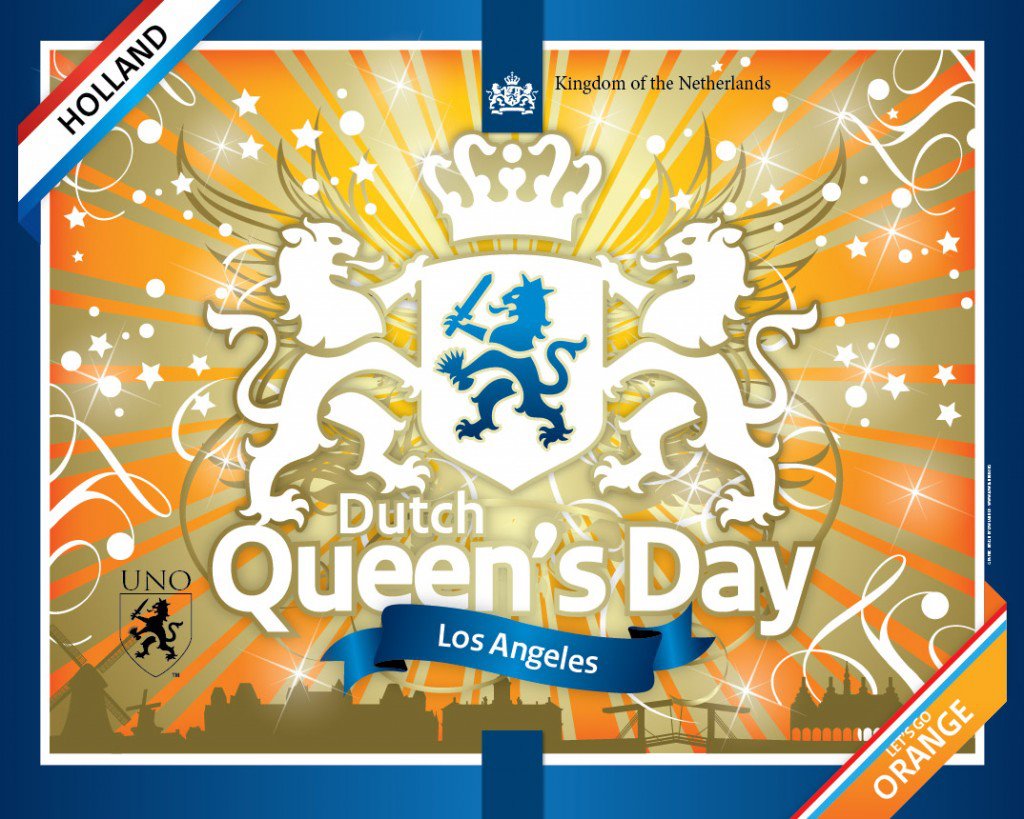 If an areal photo had been taken on April 28th , one could see a bright orange shade at the Home Depot Center sports center in Los Angeles.

Around 2,000 partygoers, dressed in orange, came together to celebrate the most beloved holiday of the Dutch. Hosted at the Home Depot Center sports complex by the Consulate of the Netherlands in Los Angeles and the United Netherlands Organizations SoCal, together with the local Dutch community, this was by far the most memorable and successful (last) Queen’s Day event in Los Angeles to date!

Visitors from sunny Southern California were welcomed at the Orange Village with bright colored flowers, balloons in red, white and blue and orange colored strings. The stage area had a large LED video screen, showing scenes of Queen’s Day celebrations and the Royal family in Holland. The audience was very excited when the event was opened by members of the royal Dutch family (spitting images of Queen Beatrix, Prins Willem-Alexander and wife Maxima), together with the Major of the City of Carson.

Children of the Dutch School of SoCal sold their stuff at the flea market, showed their musical talents and enjoyed the different games. Many people stood in line for the different kinds of Dutch and Indonesian food, as well as orange and Holland themed souvenirs. Throughout the day people were listening and dancing to the tunes of the bands Family Affair, Tjendol Sunrise (from Holland), Skick and the DJ’s of Amsterdance (from Holland).

This annual Royal Orange Event in Los Angeles has been called Dutch Queen’s Day for the last time. Our Queen Beatrix has announced earlier this year that she will abdicate her throne after 33 years as our reigning Queen, to make way for her son King-to-be Willem Alexander. When Willem-Alexander will be King, the Dutch Queens Day will be renamed Kings Day. The  investiture ceremonies will take place in Amsterdam on Tuesday, April 30, 2013.

This year’s Royal Orange Event was  extra special as we not only celebrate the 75th birthday of our Queen Beatrix. we also celebrate 200 years of Monarchy in the Netherlands this year.

All people of Southern California are invited to join in this memorable family-friendly celebration. Last year over 7000 people celebrated Dutch Queens Day in California. This number is expected to grow even more this year.

Main Gate A. Get directions via Google maps on our home page.

Why Queen’s Day?
It’s the most beloved holiday for the Dutch, celebrated over 100 years and is the official celebration of the Queen’s birthday. It has become a promotion for national unity.
.
Why color orange?
Around the world, people know Holland for the orange clothes when it comes to soccer and on Queen’s Day – which is the biggest orange party in the world.  Orange is the color of the Dutch Royal Family – the lineage of the current dynasty – the House of Oranje-Nassau (Oranje is the Dutch word for Orange). Today it symbolizes a broader pride in the country and in being Dutch.
.
Ever wondered what the difference is between Dutch, Holland and the Netherlands?

We will have live entertainment for all ages. Dutch performers living in the USA, but also special artists and DJ’s flown in from Amsterdam.

Check out our music spectacle Amsterdance:

It is also one of the very few anthems that does not focus on the history or military accomplishments of the people it represents, on the contrary, it tells of William of Orange, his life and why he is fighting for the Dutch. As a result, the anthem is written as if it were sung by William himself. The song is remarkably peaceful.

The tune of the Wilhelmus is based on a French soldiers’ song: “Autre chanson de la ville de Chartres assiégée par le prince de Condé” (English: “Another song about the city of Chartres under siege by the Prince de Condé”), which was popular around 1569 during the siege of Chartres.

There is an ongoing confusion and dispute as to what the author meant with “Duytschen bloedt” in the text, as the contemporary Dutch word “Duits” (being the modernised form of “Duytsch/Duijtsch”) means “German”. Another explanation is that “Duytsch” was at the time a variation of Dietsch meaning Dutch.

“Duits” is often replaced by “Diets”, a cognate of “Duits”, “Dutch”, “Deutsch” and “Deitsch” but meaning “Dutch” rather than German. This is done mostly, or even exclusively, because of anti-German sentiment resulting from the Dutch experiences in the Second World War. Hence many Dutch people after the war sung that William was of “Diets” blood, rather than of German blood as they did not like the notion of their Father of the Fatherland being of the same heritage as the people they hated so much during the 5 year occupation. Although the exact meaning is still, and will probably remain, unclear the official version of the Dutch national anthem uses “Duits”.

“Why honouring the king of spain?”

At the outset of the war, William of Orange-Nassau was elected Stadhouder, meaning he still represented the king’s authority. Originally, William and the Dutch people had no misgivings with honoring the king, as long as the king let them self-govern and respected their autonomy. The Dutch originally felt that the King of Spain had good intentions, but was receiving bad counsel from his Spanish delegates, which, subsequently, resulted in the king formulating bad policies. The Dutch rebels did not withdraw their loyalty to the king early on in the struggle. They only wished that their rights were honored and that they didn’t have to be subservient to Spanish policies.

The band ‘Tjendol Sunrise’ flew in from Holland to perform at the last ‘Queen’s Day’ in Los Angeles: