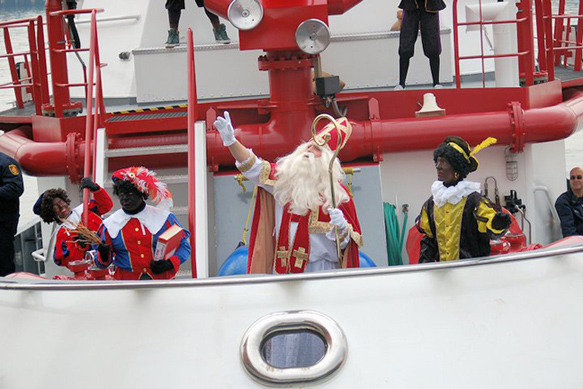 December 5th is traditionally the day for Sinterklaas or Saint Nicholas celebrations and this weekend there were many events organized by the Dutch-American community.

Of special note was the arrival of St. Nick in the Los Angeles harbor, organized by the Dutch School of Los Angeles. With help of the LA Harbor fire department St. Nick and his helpers arrived by boat to a huge crowd of children.

The origin of Sinterklaas is St. Nicolas, a bishop from Turkey who became popular in 4th century Europe for his good deeds for children. Presently, the tradition of Sinterklaas is celebrated in the Netherlands, Belgium and the Dutch West Indies when in mid November, Sinterklaas arrives from Spain. His arrival by steamboat and the subsequent parade is broadcast on TV for all Dutch children to see. In the days prior to December 5th, children sing traditional songs and fill their shoes with treats for ‘Sinterklaas’ white horse, the Schimmel. They leave there shoes next to the fire place and in the morning they find them fulled with small cookies and candies. On the night of December 5th, Sinterklaas’ assistant, Zwarte Piet, bangs on the door and leaves a big burlap bag filled with presents. Gifts are also exchanged on December 5th, called “pakjes avind” (evening of presents) by the Dutch. Christmas Eve and Christmas Day are celebrated with family gatherings and meals rather than gifts.

It is thought that Dutch settles in New Amsterdam (now New York) brought the concept of Sinterklaas to America where he transformed into the jolly old elf known fondly as Santa Claus.